I always kick off a new year looking back at my own successes and failures as well as those of my students the year prior. And 2017 was a particularly tough year for launching new apps. I expect this year to be more of the same, which is why I’m advising a slight shift in strategy for startups launching this year. But first, what changed to make it so tough out there on entrepreneurs?

It comes down to one word: attention. For the past decade, there’s been a battle to capture the time you spend on your devices. And while small app creators, companies, and solo developers had a great run, the battle is mostly over…  and unsurprisingly, Google and Facebook won. Check out the domination: 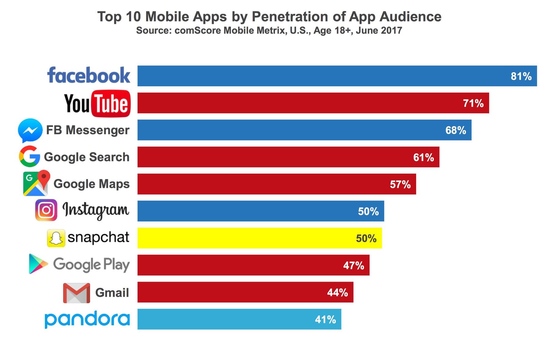 And this graph doesn’t just hold true for download numbers, but time spent on a device as well. What this means is that in 2018, you’ll have an easier time getting people to download your app than actually use it. And this is dangerous. A few of the mobile app startups I advised in 2017 failed despite high download numbers. It gave them false validation, and it’s not their fault. There’s just less attention to go around these days.

Andrew Chen, from Uber’s growth team, explains that new apps are no longer replacing idle activities like waiting in line or sitting in a train station. “Instead of competing with boredom, we’re now competing with Silicon Valley’s top tech companies, who already have all your users.”

And it’s not just mobile apps that are getting more difficult to launch. Web applications, hardware startups, Kickstarter projects; they’re all suffering from the end of a cycle in marketing as well. Just look at the adoption of referral marketing, growth hacking and content marketing across industries. Startups have been reading the same marketing playbooks for years, and at the end of a cycle only the most useful and unique content can stand out.

So while it sounds like bad news if your 2018 goals include starting a startup, there are plenty of ways to thrive in a crowded app ecosystem. Here are some ways to do it:

It’s not a surprise that you’re hearing more about cryptocurrency than ever before. At the end of a technology cycle, it feels like everything that could be done has been done. And our current cycle, roughly called the App Store/social/sharing economy cycle, is just about over. At the end of one cycle lies the opportunity found in being one of the first in the next cycle. So should you jump at that opportunity? In Silicon Valley, the three emerging cycles everyone’s talking about are in artificial intelligence, augmented reality/computer vision, and cryptocurrency. The upside is that there may be more than one winner which re-risks which new cycle you pick. The downside is the time required to learn the skills required to build a product in machine learning, AR, or crypto. By the time you become an expert in one of these fields, it might not be early in the cycle anymore. If you’re interested in these paths, here’s some material to check out:

While it might seem intimidating to go up against the big tech companies, it’s possible if you can find a segment of users that are underserved by the current players. This works really well with marketplaces and e-commerce, less so with social media.  A great illustration of this, while slightly dated, is seen in the image below comparing Craigslist with companies that have launched marketplaces in each category they sell to: 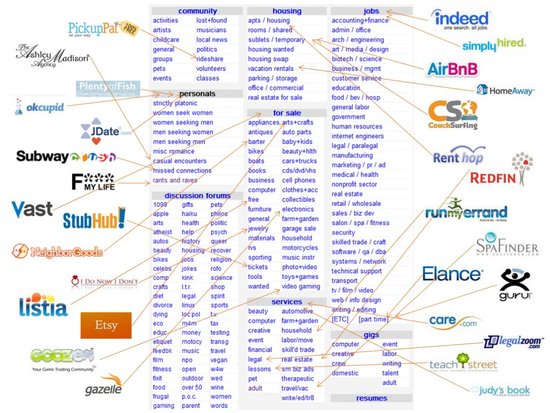 Two things to note when building a hyper-targeted business. It can be a great place to start (Amazon just sold books, and went from there) as long as the niche is big enough in the beginning. Ex. If you’re creating “Uber Eats but only for Sushi” you better make sure you’ve researched the number of diehard sushi lovers in your city. The other risk in going after an existing market is that your product needs to be better in every way to get the attention of users. If users can already get sushi from Uber Eats, what will make them use your app? To de-risk a niche business, a good strategy is to build an audience first through a newsletter/blog/podcast and then work on monetizing it. Here are some helpful guides to doing so:

Speaking of community, there are two types of businesses that are largely immune to tech cycles: those that bring people together and those that bring information together. Why? Both benefit from basic tenants of the internet: as more information and people are added to the system, the signal to noise ratio drowns out the very best of each.

For information, this is readily apparent in the rise of “stack” startups that cropped up almost daily on the front page of ProductHunt last year. These projects were as low-tech as it gets – simple directories of high-quality resources like the original Yahoo and Altavista. These products all were successful for the same reason: they had immense value in a world with Google is becoming less and less useful for subjective answers. Ex. “Who was President during in 1831?” is a much better Google result than “What’s the best resource for starting a startup?” – people now turn to curation sites like Quora and ProductHunt for those answers. (Andrew Jackson was president in 1831, if you’re now wondering). 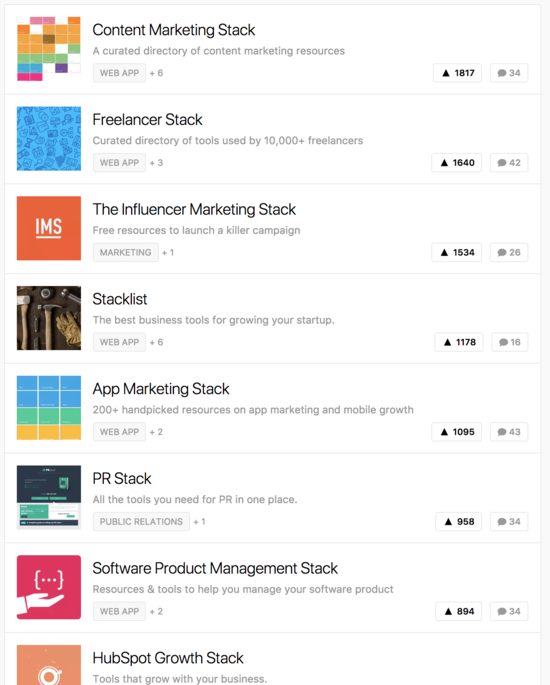 For organizing people, paid community sites have re-emerged as a powerful business model as Facebook Groups become more crowded and less useful. A great example is the organizing of “Digital Nomads” done by NomadList. A site that started off as nothing more than a directory of information for world travelers turned into a powerful community of entrepreneurs sharing travel tips. Charging $10 a month for entry and scaling quickly, the company has made roughly $30k/month in revenue just by organizing people in a way that is much more valuable than the countless traveler Facebook groups.
If you want to make a curation/community site, here are some of my favorite resources (curated, of course 😉)

If you’re set on launching a mobile app to the consumer market, don’t let me discourage you. There is still plenty of opportunity to be had at the App Store. Look no further than the rise of live trivia apps, the acquisition of tbh and the rise of indie games built without code. Here are the trends to follow in 2018:

That’s it for reflecting, now let’s get building! I’m going to be announcing some side projects of mine soon, but in the meantime, I’d love to hear some of your ideas for startups this year. Comment below and I’ll try to give out as much honest feedback as I can.